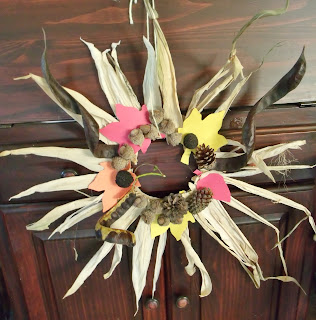 Autumn is a wonderful time of year to explore the outdoors.  I love to take the children on long walks around the neighborhood.  We find all kinds of leaves, acorns, seedpods, corn husks, feathers, and more.  Nature has a plethora of goodies just laying around for the taking.

I gave each child a bucket or bag to fill with their treasures as we walked.  It always amazes me what the children find or deem valuable enough to keep.  Their loot is carefully chosen and identified.  I delight when a 3 year old can tell if a leaf came from an oak, maple, or cottonwood tree.  It is remarkable how observant children are (if we let them be).

This year, I took our nature walk to another level.

We lugged home our brimming bags of twigs and leaves to create autumn wreaths for their parents.  This let the children display their goodies and create a fun craft.  The wreaths look amazing-  I had the children make me three to hang in my dining room windows!

I love this craft and was excited to see something similar featured in the Family Fun Magazine I received in the mail.  They used colorful fall leaves for their backdrops and the colors really popped as they hung against the rustic barn.  What a great use of nature's bounty! 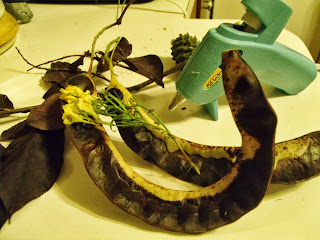 To make an autumn wreath of your own, you will need the following:
Here is how we constructed our decorations: 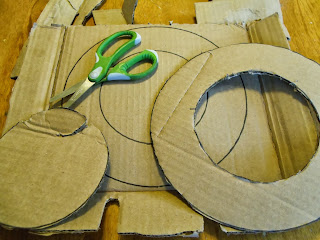 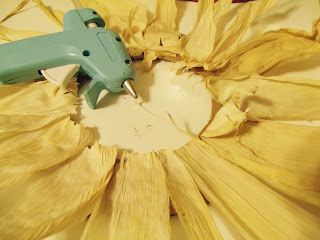 Do you have any crafts that are perfect for the fall?
Posted by Plain Graces at 6:56 PM 13 comments: 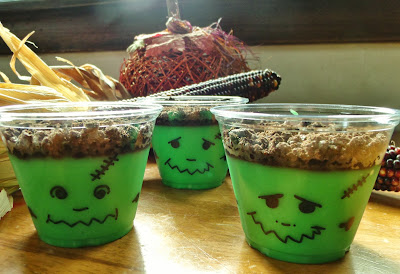 These little monster cups are what we dished up for snack today.  The boys and girls loved the creepy green pudding and the crunchy cookie topping.   It was frighteningly good!

I ran across these simple treats on pinterest or in a magazine.  I can't recall the source of inspiration, but what a neat idea!  The boys enjoyed this treat so much, that they were carted to Scout meetings and over to the neighbor's house.

Make sure you assemble plenty of these pudding cups-  the more the scarier!

To make these fun snacks you need the following:
To finish these delicious bites, you need to:

Do you have any fun and easy treats to make for Halloween? 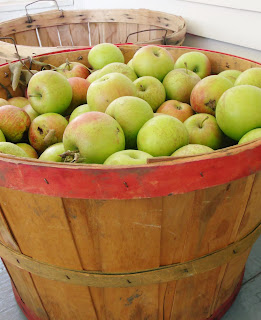 This year, the apple trees have been loaded with wonderful fruit.  The apples are large and almost perfect-  they are a far cry from the misshapen and wormy blobs from last year.  The children and I have been picking away-  so far we have yielded at least 3 baskets!

Naturally, the children want to take advantage of this opportunity to convince me caramel apples are a much needed snack! 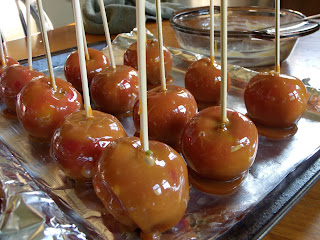 Who can blame them?

So, I thought I would write an introduction on how we make simple caramel apples.  You can keep your apple old school or indulge your senses with chocolate, candies, cookies, and more drizzled over the sticky coating.  Get creative and enjoy making a mess.

In my book, Autumn is the best time of year to enjoy a tart apple dripping down your chin!

To make these easy apples you will need: 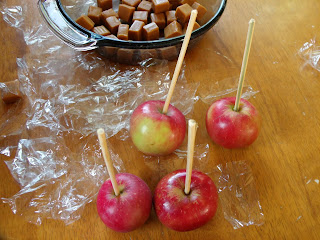 Here is how we made several batches of this fall treat: 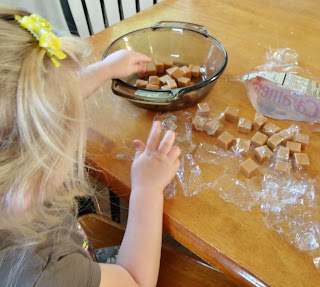 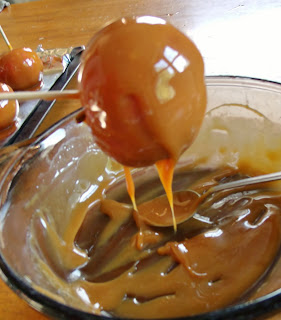 What is your favorite treat during the fall?
Posted by Plain Graces at 8:21 PM 3 comments:

I was having one of "those" weeks.  You probably are familiar with them.  The weeks where every night you have 3 different practices, games, or meetings to attend in different towns. . .

I was exhausted, but that didn't stop the children from wanting snacks and dinner.  I opted to whip up "lazy" cookies for a treat for the frazzled crew.  Everyone needed something sweet-  especially after the week we have had. 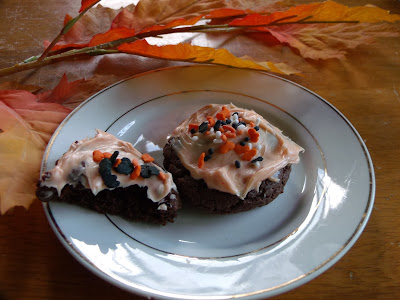 I made simple cake mix cookies and frosted them with purchased Halloween frosting!  These cookies are perfect for hectic schedules or Autumn parties and can be baked in a flash.  Simple and fast is good! 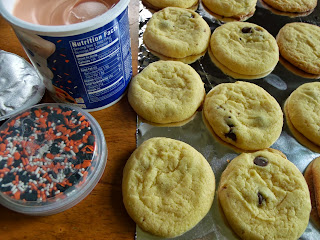 To make these simple treats, you will need:

Here is how you make these sweet treats: 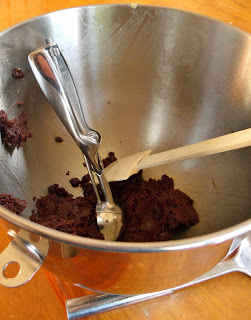 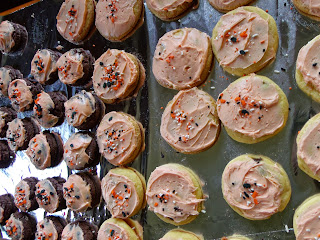 What treats are you making to celebrate the harvest season?

One Week Later...After the Tornado 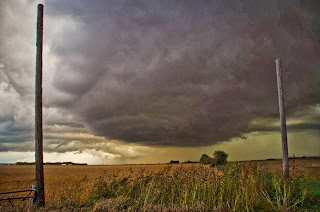 The gray sky hung low promising rain that autumn evening.  I was completely oblivious to the threat Mother Nature was stirring up just south of us.  The above picture from Siouxland Severe Weather, taken by Aaron Siders, shows the clouds as they brewed behind a veil of rain.

I paid a few bills online, scanned facebook for friends' and family updates on the snowstorm pelting the western part of Nebraska and South Dakota, and surfed a few opinionated online posts about the Government shutdown.  I was waiting to pick up my oldest son from school and planned to head into Wayne to run errands.  My younger boys and a couple neighbor children played with Lincoln Logs on the floor.

A typical, ho-hum kind of afternoon.

At least, it appeared that way.

With little warning our world was turned upside down within minutes.

A grandmother appeared at my door and informed me that a tornado warning was in effect for the area.  A tornado was on the ground barreling towards us.  She whisked her grandkids off and I raced the 6 miles to town to get my son who was waiting in the library.

That was one of the longest (and fastest) trips to town that I can remember.

I know that sounds strange, but my heart was pounding and I was concentrating on getting everyone home and nestled in the basement before the storm hit.  The constant radio warnings and my cellphone buzzing "extreme weather alert" only heightened the urgency.  Then the radio went off the air.  I pulled into our drive three minutes before the storm was predicted to be on top of us.

What I didn't know then-  Wayne, just a few miles to our south, received the brutal hit.  Here is a picture from ABC9 News in Sioux City showing a portion of the devastation: 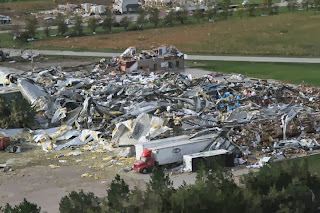 It was breathtakingly sickening.

That part of town was almost unidentifiable.

The tornado leveled a good portion of the eastern side of town.  It left a mass of homes, farms, and businesses strewn across Northeast Nebraska.  Luckily, no one died.  People were injured and hundreds were left unemployed.  The storm knocked most of the residents into a stunned state of being.

However, Nebraskans don't stay down for long. 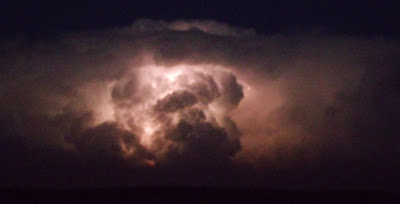 Within minutes, the roads were filled with emergency crews racing to help.  Volunteers flooded the town and clean up had begun.  People rolled up their sleeves and united as these dark and lightening filled storm clouds rolled away to the northeast.

Because it was the right thing to do.

It's amazing to see the camaraderie and support people from all walks of life have offered to the community.  Old and young, rich and poor, Lutheran and Catholic, Republican and Democrat, all working together for one common goal.  Shoulder to shoulder.  People putting aside differences for the common good.

It's been one week since the EF4 tornado hit Wayne.

Businesses that were wiped out are already back to work in rented offices and machine sheds.  Fundraisers are springing up to help those in need.  Wayne is rebuilding and forging ahead with dedication and teamwork.

I wish that Washington and America would learn a cooperation lesson from Wayne, America...


Tonight, our thoughts and prayers are lifted for those in need-  especially for the communities in South Dakota devastated by the blizzard, my neighbors and friends who were impacted by the tornadoes, and for the people suffering from the Government shutdown.
Posted by Plain Graces at 8:44 PM 5 comments:

Last week, I was fumbling around for activity ideas for the letter "Ff".  I typically include Fall/Autumn activities, but I wanted something fun and fantastic that we haven't done before.  I was stumped.

I sat listing and brainstorming words that begin with "F".

Finally, an idea that was fun and appropriate!

I incorporated fish, fingers, and friends to create an easy hand painting craft.

It was simple and the kids love creating fish friends with their fingers.

It painted up a fabulous time!

Here is a sample of some of our Fishy Finger artwork: 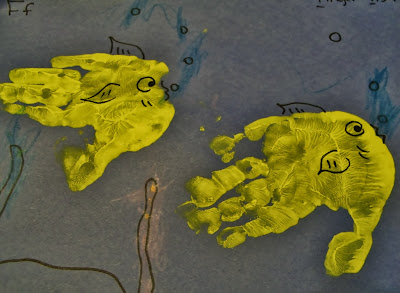 Do you have any lesson ideas for the letter "Ff"?