I woke up yesterday to wails of disappointment escaping from my youngest son's room.  It took me a minute to realize that I dropped the ball last night.  Not a real ball, but I forgot to play the role of the "tooth fairy".  I broke the parent and tooth fairy clause in the parent handbook.

He was upset that the tooth he tried so hard to wiggle loose for weeks remained in his cup-  forgotten.  He was worried that the tooth had a cavity or it wasn't good enough because of the hole in the bottom.  It took a few minutes, but eventually I rationalized that something important probably had kept her away.  Things happen...

Last night, in a last ditch effort to redeem myself, I wrote up a small apology and added 4 extra quarters to his haul.  This morning he was so excited!  I think he enjoyed getting the letter more than the money. 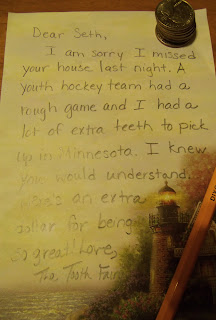 Have you ever botched a tooth fairy mission?  What did you do?