I just wanted to thank God for making children washable.  I would have thrown out my three sons a long time ago. . .  . .

A good meal isn't great unless a child is wearing their food. 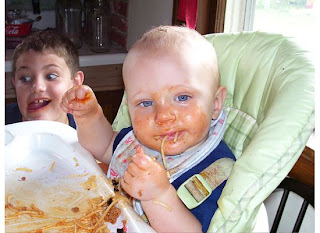 What are you thankful for?
Posted by Plain Graces at 6:43 AM 6 comments: Links to this post 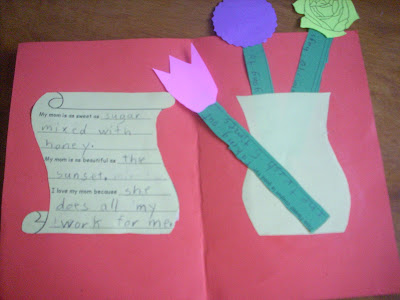 I received this wonderful card from my middle son last year.  He made it at school and surprised me with it over a simple breakfast (toast and jelly) in bed for Mother's Day.  I thought it was sweet and delightful.  It was too cute not to share and I can credit my son's teacher with the sweet idea.

*This simple card incorporates "coupons" and gift giving in one.  The card "creator" makes a bouquet of paper flowers with promises written on the stems.  A few examples are:
*After your flowers are made, make your vase.  Cut a simple shape out of paper and carefully glue the sides and bottom to the card.  Remember to leave the top open.

*Next, slip the stems into a slit at the top of the paper vase.

*You can write a special poem or write a fun story on the inside of the card to personalize the gift.  My son's teacher used a simple template for the children.  Here is what her inside reads:

*Spritz with a little perfume and find a special person to deliver your card to.

Tonight I had an epiphany of sorts and it all started when I sat down on the couch to feast on a reheated plate of soggy fish sticks and a frozen mojito.

I lounged there in my pajamas munching the mystery fish and watching MANOR HOUSE (a series that aired years ago on PBS).  It had been a typical crazy night in our house and finally, I had the boys fed and tucked snug into their beds. We had early morning activities, an early bus route, preschool, soccer games, and track practice.  I was exhausted-  so naturally I vegged out in front of the flickering tellie.

It finally dawned on me that I was not accomplishing anything.  Well, I guess I was learning a little about Edwardian underwear and exploring the plight of a scullery maid. . . BUT was I "getting my business done?"

Yes, I just quoted the television series THE MIDDLE.  I am not completely insane, but my sons and I watch that series every week.  Last night's episode was about accomplishing tasks in your life that matter.  It was a meaningful message with a sense of humor slapped on the side, but the theme must have stuck in my head.

Yes, I have managed to juggle my family and keep everyone on track, but I was missing something.  I know this sounds selfish, but what was I doing to get my business done?  We have been doing a little remodeling and my oldest son was confirmed on Palm Sunday.  I have taken a self imposed hiatus from the blogging world due to being preoccupied planning a wedding and organizing Vacation Bible School.

Tonight, I have decided to saddle up and ride this horse-  I mean, blog again.

So now I am left to ponder the world of Upstairs, Downstairs and my next blog post topic.

Maybe, it will focus on the sickening feeling I get whenever I hear Celine Dion's TITANIC love song.  Really?  Couldn't they find a different song for the 3D version?  It was bad enough 14 years ago during the first release when all the radio stations cued up the song every 15 minutes.

However, I am starting to channel my inner Bridget Jones and may need to seriously contemplate what exactly they put in a mojito.  Lime and mint?  These pouches are tasty. . .

What will you do to "get your business done"?
Posted by Plain Graces at 5:51 PM No comments: Links to this post