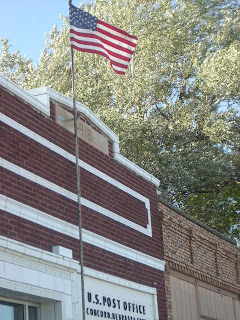 There has been a flag flying in front of our local United States Post Office since 1881.

An 'Old Glory' has weathered Nebraska autumns, winters, springs, and summers for over 130 years.  Post Masters may have came and went, but those hands which raised and lowered the banner witnessed the turn of two centuries, the sinking of the Titanic, two World Wars, a Great Depression, a British invasion, the sexual revolution, cable television, and September 11th.

Now, the flag flying in front of our United States Post Office is threatened and probably will never be raised again.

I live in a community that is currently in the process of having their United States Post Office removed.   It will be replaced by supplying services with a rural route.  We had our "town hall" meeting with the Postal Service representatives on Tuesday.

According to the regional representative, the USPS is losing 28 million dollars every day.  The circulation of mail is down 25% and little revenue is coming in.  They are locked in by the government's rules and regulations, but do not receive any income from taxes or federal aid to help fund the Postal Service.  Besides cutting 90 or more Post Offices in Nebraska, they are looking to shut down the processing plants across the state.

It's bleak.  The entire country's mail service is in jeopardy.

History romanticized the rough and tumble days of riding mail with the Pony Express. Now we may have a chance to relive this western relic.  I am not proclaiming horses and cowboys will deliver our mail, but overnight delivery and fast mail may be a thing of the past.  No matter where you live, processing and delivery will take longer and services will be compromised.  This poses problems for businesses, newspapers, medical suppliers, and Netflix (just to name a few).

I am an avid couponer and I understand the value of a 25 cent coupon.  I know upfront it may not be worth much, but when you combine it with others the valued amount adds up fast.  Monetarily, I understand why the Postal Service is considering closing all the smaller offices.  Morally, I question their reasoning.

What can we do?

We can contact our local representatives, congressmen and women, and state senators.  Petition them to examine the rules and regulations the government imposes on our postal system.  If a change doesn't happen soon, we will no longer have access to a United States Postal Service.

Less junk mail is great, but I rely on our mail system.  Do you?
Posted by Plain Graces at 7:21 AM

Hello
I am a new follower. Please stop by and check out our new blog Blog Hops Everyday. Feel free to add your blog hop button if you have one and/or add our button to your site to help us grow. Thank you and Blog Hop Till You Drop!

I agree with you. We'll see, I don't know if the government believes this. I don't think a one or two cent increase later this month will change the outcome...