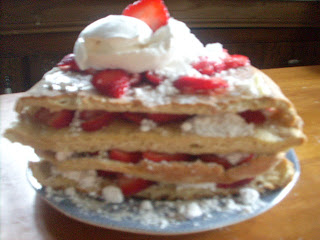 I finally got around to making June's recipe from the 1927 Cookbook.  I thought this recipe would make a wonderful finale for the fireworks on the 4th of July.  It was a sweet buttery dessert that wowed the neighbors and boys.  I needed a larger serving platter, but it was delicious.

I have several ideas for adapting the recipe stewing in my mind.  Next time I may cut little shapes out of the dough and make small shortcakes.  I would have liked to incorporate some of my fresh raspberries, but the children devoured them before I had a chance to include them.  I am also going to chill some real cream.  I love trying something new.

I did have to substitute plain yogurt for the sour cream this time around.  I wish I had real cream on hand, but it turned out nicely with good old whipped cream.  Someday, I will learn to read the entire recipe before starting.

Here is the recipe: 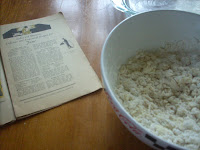 "Sift flour with salt and sugar twice (I whisked it for a few minutes-  I didn't want to dig for the sifter).  Chop in the butter with two knives until it is fine as meal.

Dissolve soda in a little warm water and stir in the sour cream, add the egg, well beaten.

Mix into the flour with knife, stirring until flour is well mixed.  Making a dough that can be easily handled.  Do not knead with the hands.

Turn out on floured board, roll out in 2 sheets about 1/2 inch thick.  Have ready round or square tins, well greased. 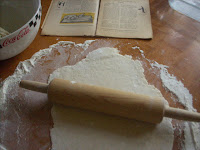 Pat layer of dough in pan, spread top with melted butter.  Fit another layer of dough on top of first, and butter top of that.  Bake 2 tinsful which will be 4 layers.  ( I used a 9x13 pan and just cut the dough into halves, which equaled 4 layers.) 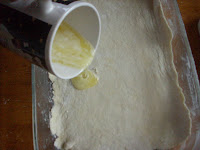 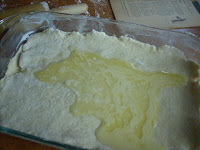 Bake in a hot oven, which is about 400 - 425 degrees until the dough is well browned.  I think it took about 20 minutes or more for mine to finish-  just keep an eye on it. 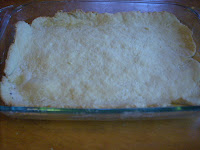 Remove from oven, separate the double sheets, spread butter between, then a thick layer of well washed, drained berries, and sprinkle thick with powdered sugar.  Pile the 4 layers together and cover with berries and sugar. 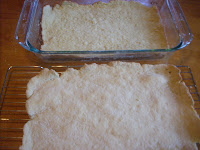 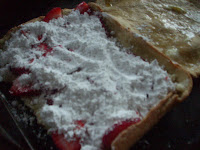 Serve it at once, while warm with thick sweet cream.  If allowed to stand pastry will be juice soaked and soggy.  This is a fine recipe to use with any fruit."

I personally think that this would taste better if it would be allowed to soak up a little of the juices.

Keep an eye out for more recipes from my 1927 cookbook.  July looks to be a fun month!
Posted by Plain Graces at 11:24 AM