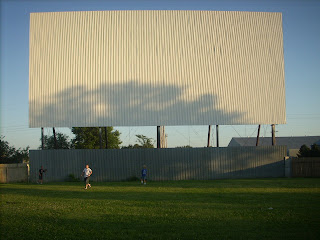 We took a trip down memory lane and introduced our sons to a little relic known as the "drive-in movie".  I grew up with The Pineview Drive-In near Long Pine, Nebraska and wanted the boys to get a taste of the experience.

We loaded up the minivan and headed over to Neligh, Nebraska for the Starlite Theatre (we tacked on a little camping expedition to round out the weekend).  This was a frugal mini-vacation aimed at showing the boys another side to Nebraska.

At twilight we spilled out of the vehicle armed with bug spray and blankets.  Our family miraculously found a parking spot in the front row.  Nestled in the grass we watched two movies and spent the majority of a July night under the stars.  We chowed down on popcorn and Cheetos as we watched Mater save Lightening McQueen and Jack Sparrow sail the seas.

Overall, the boys enjoyed this piece of nostalgia.  My oldest son kept referring to the book The Outsiders and tossed in a few 1950 jokes to rub it in.  We played catch before the movies started and chatted with our neighboring vehicles.  Thankfully, we escaped any Grease remarks.

I reminisced about summers past with my family and friends.  I told the boys how Grandma would fill a huge brown paper bag with popcorn from home and let us pack everyone in the old Buick for a night at the movies.

The drive-in had a swing set for the children to play on before the movies and there was outdoor seating by the concession booth.  The "teenagers" would always park in the back and hangout.  (I conveniently left out a few details.)  We also had to physically attach a cord to our car's antenna to hear the movie. That impressed the children.  No digital signals back then.  Can you imagine their surprise?

We had a few hiccups on the way out of the drive-in, but that is completely normal when you travel with us.  Two of the boys had a bout with a stomach bug and I vow never to allow Cheetos in the van or my house again!

Our camping trip was cut short, but we had an interesting adventure that we'll be able to laugh at for years to come.  I had a whole list of historical markers and museums on the itinerary, but they will have to wait for next time.

Have you introduced your friends or family to something nostalgic from your past?
Posted by Plain Graces at 11:31 AM

an interesting article to read

I go to see daily some sites and blogs to read articles, but this website provides quality based posts.