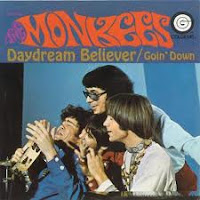 I was sorting through my Monkee box the other day looking for a CD, but I found a book that was laden with earmarks and pages hanging loose from a lot of wear.  It was the book Monkee-Mania by Glenn A. Baker that I carted everywhere back when I was young.  I opened the book and was immediately taken back to the days when Davy and the boys reigned over my world. 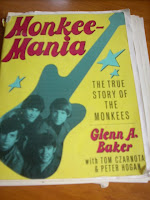 I actually unearthed a piece of Monkee background that I didn't know.  I was reading about the wildly popular song Daydream Believer.  It stems from an interview in the book with Davy.  Here's an excerpt from the book:

"We'd done twelve songs and the thirteenth was Daydream Believer.  I said, "that's terrible."  I was a baritone and it was in the wrong key for my voice.  I'd been in the studio all day, I was tired and I'm singing these words about twelve times, "cheer up sleepy Jean, oh what can it mean to a daydream believer and a homecoming queen."  I kept asking Chip (Chip Douglas, producer and bassist) what the words meant and he said "don't worry, just sing them."  I said O.K. ... I'll sing it until I get it right.  So Chip says, "all right one more time, Daydream Believer" and I started it and I failed and I failed and I failed.  Hank Cicalo, the engineer, had his own way of numbering takes so he could find them, he'd call them 1A or 2A, like that.  Anyway, all of a sudden he says "7A" over the talkback and I wasn't listening so I said "what number is this?" and they said "7A!" in unison.  That kicked me on a bit and I got it down but you can tell from the vocal that I was pissed off." 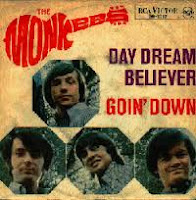 First, I had never assumed that Davy was angry while singing that iconic song.  That proves that he is very professional and left a world unaware of his true feelings.  Not many people are able to move on and keep working.  I think that is a sign of Davy's true character.

After reading this, I had to crack out my old CD's and listen for any signs of a temper.  My husband listened in and was impressed.  We couldn't really discern any hints of anger, except a few enunciated words here and there.  I am not convinced that even is a sign.  My music teacher used to harp on us when we wouldn't hit all the sounds.  Mrs. O'Hare would have loved him!

Second, I never understood why the Monkees all chimed in at the beginning with "7A!".  I thought it was part of an act.  I like the beginning a lot more now that I can envision the scene.  I feel like you get a glimpse of the guys being themselves.

Third, I was surprised to discover that Peter "cites Daydream Believer as one of the few tracks that features playing that he is proud of...  'I can identify with it because I played the piano lick on it and I feel like I made my mark because on Anne Murray's version her pianist plays my lick'."

Finally, I was confused by the words to the song for a long time when I was a girl and I ended up concocting my own meaning. It makes me feel a little better that Davy questioned them once too.

Were you surprised?
Posted by Plain Graces at 6:37 PM

It's remarkable to pay a visit this web site and reading the views of all colleagues about this post, while I am also eager of getting familiarity.

Great article, just what I wanted to find.

you're truly a good webmaster. The web site loading velocity is amazing.
It seems that you're doing any unique trick. Also, The contents are masterwork.
you've done a wonderful process in this topic!