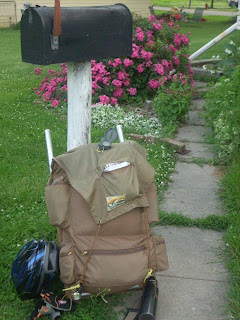 My oldest son has officially launched on his bicycling trip to the Black Hills in South Dakota.  This is his first High Adventure trip and I have been losing sleep worrying at night.  I am thankful he gets this opportunity, but relieved he won't be whitewater rafting this excursion.  My struggle with cutting the apron strings is an entirely different post.

This post will be about the fashion code for Scout uniforms and mountain trekking that I was not aware of.  At least, not the official code...

I envisioned that as a mother of three boys I would NOT have to deal with clothing drama.  I am learning that perception was uninformed and misguided.  Apparently, boys do care about clothes.

I was schooled this weekend as we packed for High Adventure.

We shopped a whole afternoon away, something we don't typically do.  I scrounged around all weekend to find the right mess kit, camping gear, and compression shorts.  I had a budget, limited stores, and a moody teenage boy to deal with.  All the stress came to a head when we were in the sporting good store at the nearest mall, 50 miles from our home.

I had finally found Under Armour shorts.  I was ecstatic and so was my son.  Short lived was that.  They had a wide array of colors hanging on the rack.  Blues, whites, reds, maroons, and blacks swayed underneath the fluorescent lighting.  We found one pair of black shorts in his size.

I also found a stubborn streak hidden inside my son.

He refused to wear any color beside black.  Really?  He would be wearing regular clothing over them and I didn't see the problem.  We finally compromised with white shorts, but he was saved by a good deal on a knock-off brand at Wal-mart.  I immediately returned the dreaded white ones and saved my pocket book $40.  Crisis diverted.

I was relieved we had the basics packed and ready for the Black Hills. A new uniform shirt, compression shorts, rain poncho, and bike gloves were rolled and stuffed into his backpack. That was before I received the e-mail stating that the boys needed to have a red neckerchief (scarf) to wear with their Class A uniforms when they retired the flags at Mount Rushmore.

I forgot to get the scarf!  Luckily, I am addicted to Project Runway

and channeled my inner fashion designer.  I remembered a bolt of red polyester my husband's 96 year old grandmother gave me.

That was about the time we lost electricity due to a wicked storm front moving across our part of the country.  Now I was down to 7 hours before he left and no way to purchase a neckerchief.

I cut and snipped.

I only stubbed my toe twice.

I managed to fashion a suitable alternative for the flag ceremony.  Tim Gunn would have been proud.

Well, you can imagine the horror on my son's face when I showed him the creation.

Luckily, the Scoutmaster had purchased a few extra scarves.  A true Scout is always prepared.  My oldest won't have to sport the homemade bandanna sewn by candlelight fashioned from the ancient polyester relic.

Whew.
Have you had a similar encounter with a son or daughter?  How did you handle it?
Posted by Plain Graces at 9:28 AM

I'm glad the Scoutmaster had extras! I don't have kids, so this hasn't quite happened to me yet, but I have nieces. I have made skirts for them for when we go to the beach. I've been sewing like mad trying to get everything done before tomorrow night! I just hope they like them, and I hope they fit!

The beach sounds like a lot of fun! Have a great time and enjoy your nieces- I don't have any of those. : ) All boys in this family.

Free memorial day images
for all.