I forced my sons to watch the DVD, The Monkees - Our Favorite Episodes

, the other night.  They were less than impressed when I told them they needed to watch at least one show.  They were slightly amused, but they got a kick out of the retro commercials for Rice Krispies and Kool-Aid.

It's good to know my children are easily enthralled with quality commercials.  I keep telling myself that they won't jump on any bandwagons.  I am hoping positive thoughts will overcame the flash and allure of fabricated advertising campaigns.  I was preoccupied with my boys being influenced by advertising, that I didn't notice the effect it had on me.

I was inspired by this little number:  It shows the "boys" munching on cereal beside the Monkee Mobile.  Davy pulls a fast one and has developed a  truly unique way to eat his cereal-  sugar and all!

I decided to try my hand using Davy's method at breakfast this morning.  We didn't have Rice Krispies, but cornflakes were on the menu.  The children gave me a weary eyed look as I poured in the sugar, then the milk, and in the other bowl I put the cereal.  Obviously, I didn't pay too much attention the first time I saw this commercial.

I am old enough to know better.  I shouldn't have copied what I saw on television, especially if it aired in the late 60's performed by a group of musicians named The Monkees.  My kids knew better, but I still went ahead with my feat.

Here's what went down: 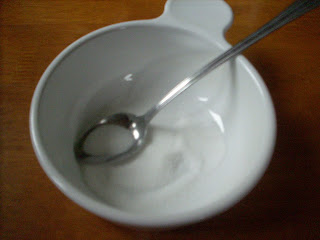 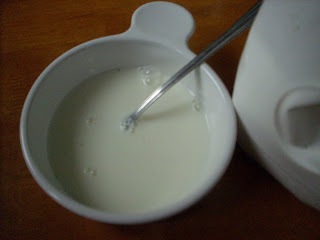 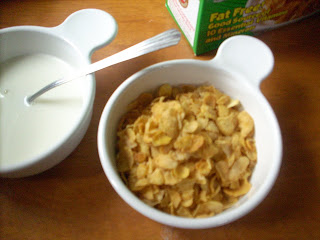 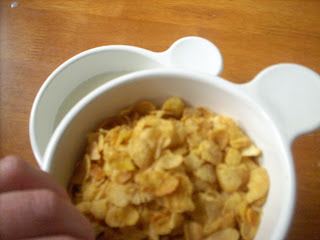 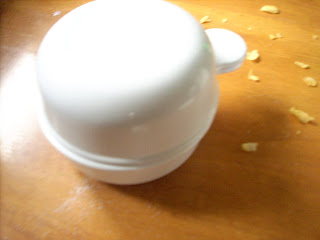 Okay, a little mess.  I can handle that.  I had to review the clip on YouTube, and notice that Davy doesn't put the cereal in the other bowl.  This is only a sign of the fun to come. 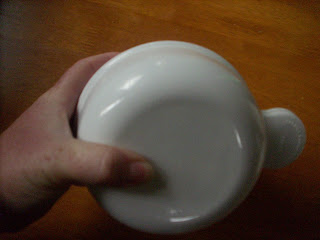 Two hands would be ideal, but it's hard to take a picture and turn two bowls of cereal.  Look what ensues... 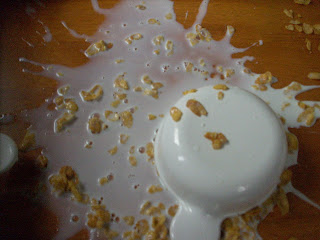 I had a very teachable moment.  I told the boys that this is a prime example of why we don't copy what is on television.  The Myth Buster's remind us of this every episode... 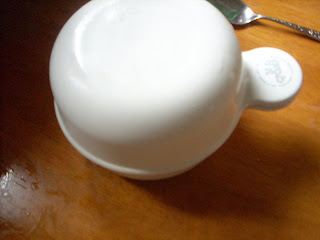 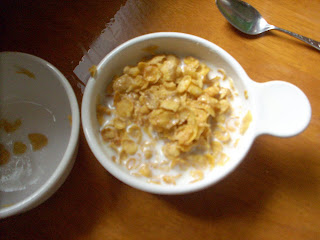 I finally did get my cereal.  Although, Davy would not approve of my bad form and sloppy technique.

Have you tried this?  Do you have a fun way to eat your cereal?
Posted by Plain Graces at 3:01 PM

I haven't attempted this again- I don't know if my ego could handle another mishap!