I have a new DVR addiction and I am enthralled.  Last fall, I stumbled upon this show The Fabulous Beekman Boys on the Planet Green channel.  I was expecting a show about two brothers who moonlighted as self sustaining farmers.  I had an image of an American version of the British show based on Dick Strawbridge's family's It's Not Easy Being Green: One Family's Journey Towards Eco-Friendly Living.  Whoa!  Boy, did I get a surprise.

I am a little naive and it took almost a whole episode before I realized these guys were not farmers, but transplanted city boys on a mission to ranch goats.  I also didn't catch onto the fact that they were not brothers until the second episode.  However, I love Josh, Brent, and even Polka Spot. 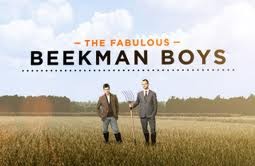 Josh works in New York City while Brent starts the Beekman 1802 soap and cheese business.  They both have amazing strengths and it's wonderfully amusing at how they adjust to farm life.  Brent was a physician who worked closely with Martha Stewart.  He's a straight laced guy who likes to have his ducks all in a row.  I still laugh at Brent trying to align the tractors and their scoops for appearance.  Josh is in advertising and also a published author.  He's a little more laid back and always has an amusing comment.  Even Farmer John's tears and affection for his herd of goats on occasion is funny, but endearing.

We get an inside look at their new lives and an occasional Martha visit.  I find new ideas to incorporate into our daily routines.  It might range from relationships, hosting parties, making spicy caramel for ice cream, or baking.  Right now I love Josh's garden and I am feverishly trying to talk my husband into letting me use trellis for my vines.

These two guys are entertaining in their own right, but when you throw in Polka Spot it becomes hilarious.  Polka Spot is their lama who stands out from the herd of goats.  She is by far more stubborn than Brent and a little more daring than Josh.

If you get a chance, turn in and enjoy this little show.
Posted by Plain Graces at 5:55 PM

Email ThisBlogThis!Share to TwitterShare to FacebookShare to Pinterest
Labels: Dick Strawbridge, It's Not Easy Being Green:One Family's Journey Towards Eco-Friendly Living, The Fabulous Beekman Boys