Saturday night I was laying on the couch taste testing the Easter candy I had stashed away and watching some DVR'd episodes of Conan.  I naturally had to watch the Pee Wee Herman episode.  Many of my Saturday mornings as a kid were spent learning about tinfoil balls and talking chairs.  Who didn't want a playhouse like that? 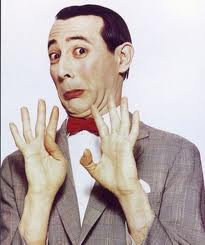 I know you are wondering how a grown woman could endure Pee Wee.  His chortle and iconic outfit are too much to bear most days and his television show is the last thing that comes to my mind when his name is mentioned.  A scandal back in the day is what I associate with Pee Wee, just like his red tie.  It was only out of nostalgia that I tuned in, but I had an awesome "aha" moment.

During the jokes and "ahhh huh huh", I came up with an idea for my Sunday School class.  It's almost heresy to say you came up with a church lesson from a skit on Conan O'Brien.  Pee Wee and Conan were practically genius in the way they acted out the temptation of Jesus in the wilderness, which just happened to be the next lesson for my Sunday school class.  I was entertained, and I know this story fairly well.

Morning rolled around, even with Daylight Savings time, we made it to church on time and I challenged my class to put on a skit for the story depicting the temptation of Jesus.  I didn't make too many demands.  They had just a few requirements:  everyone had to be involved and they need to include verses like "man cannot live on bread alone".  I didn't expect too much.  After all, they are only 3rd and 4th graders with about 45 minutes to prepare.

We have went over this story before and I know the children know the basics.  I didn't want to have to drag out the Bibles and make them look up the verses and write them out.  Lent can be a pretty solemn affair and I wanted them to explore this story and the importance of it.  Without it, there might not have been an Easter story.  The children created and developed their own script. I am hopeful that they embedded it deep into their memory.

The children surpassed my expectations.  They used paper, crayons, scissors, and a stapler to create props and scenery.   They had stones that turned over to show loaves of bread.  Jesus sported a beard and Satan had a nice pair of red horns.  The children decided who would play Jesus and Satan, but they also incorporated narrators and a lone posed cactus in the background.

They told the story better than I could have if I made them look up verses.

My only regret was that I hadn't thought about finding an audience to witness their performance.  We didn't have cue cards or audience prompts, but they did a great impromptu delivery.

Pee Wee Herman and Team CoCo turned an average Sunday school class into an engaging and memorable morning.  I know the children were excited and actively discussed the story and the three temptations.  There were no chuckles or silly jokes, but my class easily could have given Pee Wee a run for his money.

Have you been inspired in an unlikely place?  What was it?
Pee Wee Herman on Conan and performs Ash Wed. Skit
Posted by Plain Graces at 8:11 PM