Easy as pie.  Right?  I have heard that saying from the time I was knee high until now.  I find it a little ironic that making pie isn't really that easy.  It has taken me a lot of practice and patience over the years to finally get the skills necessary to produce edible pies.  I used to just buy them from the Schwan's man or Mrs. Smith.  That all changed when we had a bumper harvest of apples and I was engulfed by the multitude of apple baskets brimming with fruit.  Last night we found a 99 cent bag filled with apples begging to be used at the grocery store.  I knew what to do with those babies! 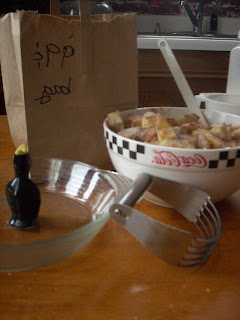 My Grandmother is an expert pie maker and I have watched her roll the dough and fill the pans for years.  I have watched her, but I still couldn't make a flaky crust or meringue.  When I decided there was no time like the present to learn, she was the first person I called.  My Grandma can do almost anything and I hoped she would be able to teach me pie.

I have used recipes that promise no fail crusts.  They call for eggs, vinegar, and more odd ingredients for a crust.  I still had a hard time rolling a crust so I could still finagle it into the pan.  Grandma pulled through with her basic pastry crust that probably has been the same for hundreds of years.  It's extremely simple-  maybe that's where the term easy as pie comes from.

The trick Grandma filled me in on was to make sure you had enough water.  You may need to add more cold water than the recipe says.  It all depends on the weather and you can't roll a crust if it won't stay together. 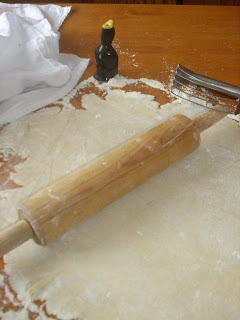 Rolling out the dough is fairly simple.  You will want enough flour to coat the dough and prevent it from sticking to the table.  You will need to flip the dough over when it's small to keep it floured and pliable.  A trick I learned from Grandma is to roll in one direction.  This will keep the dough in a more circular shape.  As you can see from the photo above, I haven't mastered this yet.

Now, you come to the tricky problem of getting your lovely thin crust into a pie pan.  I have ruined many a pie with cracks and breaks.  If the pie is just for family, I just press it into the pan and forget about it.  I know, Martha Stewart would be appalled by this blog.  Have no fear, Grandma has a trick for this!  You fold the circle in half, then quarters, and gently position into the pan.  Unfold the layers and Voila!  Grandma wouldn't say voila-  maybe "good job" fits her personality better. 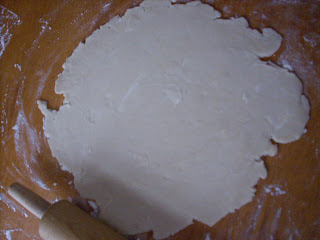 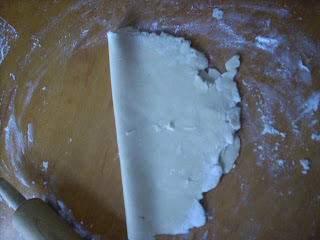 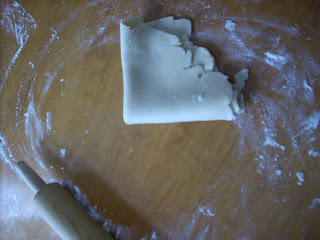 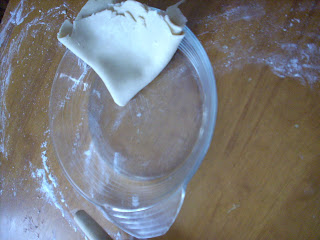 The worst is now behind you.  Press the bottom crust against the plate to make sure there are no pockets of air or cracks in the dough.  If you want single crusts, put pie beads in the crust for baking.  Trim the excess off the edge and crimp your dough.  You would probably bake it in a hot oven at 400 degrees or higher for about 20 minutes.  Check your recipe.

I was planning on a double layer apple pie.  I use a pie bird to vent the steam from the inside of the pie.  You don't need a pie bird, it was just a gift from my mother and the kids get a kick out of having a blackbird in a pie.  It might come and get our noses-  you never know?  I put the pie bird in and fill my pie with the apples.  I gently press the sugary apples around to prevent gaps and then I add butter slices.  Remember the butter.  I tend to forget the butter and it makes a huge difference in the taste. 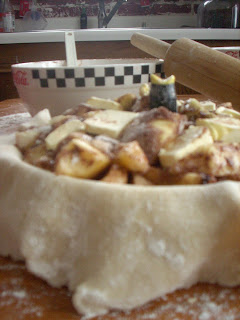 Finally, you roll out the top crust in the same manner as the bottom.  Fold it up, but before you transfer; take a knife and cut a few slits on the folds.  This will let the pie filling vent and my Grandma calls the marks "little birds".  Center the top crust over the filling and unfold.  Gently press the edges together and take a knife to trim the excess off.  I leave about a 1/2 inch around the diameter.  I fold it under and crimp the edges to seal in all the juices. 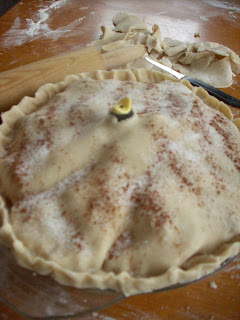 ﻿I have used several different washes for the top crust.  I have used beaten egg whites, milk, and even water.  The main thing is to get the crust moist enough to adhere sprinkled sugar and cinnamon on top.  Make sure you sprinkle a little extra into the crevices of the edges to make it as tasty as the whole pie.  I never promised that this was a low calorie endeavor.
Put your pie on a cookie sheet to catch any drips in case the pie does boil over.  You probably don't want to set off the fire alarms and have a mess to clean up.  Bake at 425 degrees for about 20 minutes and then turn down the heat to 350 degrees for another hour or so.  If the edges brown too fast, you can make a tinfoil cover to shield the edges from the heat.  Happy Eating!
Pie Crust Recipe:
2 cups of flour
3/4 cup butter/shortening (I prefer a combination of the two, but it doesn't matter as long as it's 3/4 c.)
4 Tablespoons cold water
Cut in the butter and shortening with the flour.  You can use a pastry cutter, but I prefer my hands.  When it's pea sized you add the water and mix until its a dough ball.  Happy rolling!
Apple Pie Filling
6 to 8 cups peeled and sliced apples
1 cup sugar
2 Tablespoons cinnamon
2 Tablespoons flour
4 teaspoons butter
*  I add a teaspoon of almond or vanilla to add a little something extra.  This is optional and not in my Grandma's recipe!
Pie might not be easy to make, but after a few practice rounds you will be able to roll good old fashioned pies even my Grandma would be proud of.  Pie making is a little difficult, but eating them isn't.  What's your favorite type of pie or shortcut?
Posted by Plain Graces at 3:18 PM

Remember to check out my $20 Amazon Gift Card Giveaway! You can have your pie and shop too!

Looks good! I am terrible at making pie crust, so I always leave that to my mom! I am much better at cookies and cakes!

Wendy, the mother that delivered the child was expecting a
massive baby of about ten pounds, but not 15!

By taking the time to read a lot of information like this to add my insight . cara menggugurkan kandungan