On Pins and Noodles 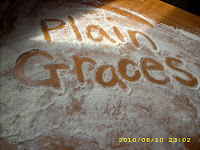 It's late Thursday night and I am listening to two of my boys play the wii. They are playing some crazy game that involves balancing weird shapes on floating blocks in water. The premise of the game is fine, but the music sounds like the soundtrack to an X-rated Seventies movie. What are these wii people thinking? Or better yet,what do they watch?

We've had a hectic day. All the kids were ornery. That may be an understatement. I am taking it all in with hopes that this is a sign the weather may finally be changing. I will gladly enjoy a temperature above 10 degrees. The snow is melting, the ice is pooling into puddles, and the kids are growly and craving the outdoors. I pray that the groundhog is right and spring IS around the corner.

With all this indoor time, we've had to make our own fun and entertainment. The kids enjoy racing around the dining table, but I can only take so much of their thumping little feet on the hardwood floor. I dusted off the rolling pin and brought them all in the kitchen for some good old fashioned noodle rolling.

This has become a favorite activity among the children. Like a cat who hears a tuna can being opened, they come running when the rolling pin starts creaking. Smiles and screams of glee meet my ears as they crowd around the table. They pull out the benches and sit down for about 15 minutes of infatuation with flour and a rolling pin.

Very few items are as timeless as a rolling pin. Families for centuries have relied upon this simple tool. In a world full of gadgets, gizmos, and downloads it still has an allure that is comparable to SpongeBob. There is something amazing about rolling and pressing a lump of dough into a thin sheet.

Rolling and rolling is repetitive, but it's therapeutic and hypnotizing. My own Grandmother would roll noodles during the early stages of labor to keep her mind off the pains. I roll noodles to gain peace of mind and to have a connection to the simple life.

In a world where we can buy everything and anything on the Internet or in the freezer aisle of the grocery store it seems a little odd for someone to roll out noodles. I've even had people tell me that they didn't know you could make noodles at home, let alone use a rolling pin. I guess the best way to get soup involves a bag of dried noodles that has been processed, shipped, and ripened on a store shelf. I do buy macaroni and spaghetti this way.

However, there is something soothing and satisfying when you do it yourself. It ties you to your heritage and saves you a bit of "dough" in your wallet. I can imagine a lot of our Grandmother's spent plenty of hours cutting and drying noodles. Whether they were waiting for a threshing crew or their father to come home from work, they stood at the table fighting the dough just like I do now.

The kids are poised and ready. We measure and count three cups of flour. Then we make a well or indention in the middle of the dough and add two eggs. Of course we need to count each egg as I crack it on the edge of the bowl. We sprinkle a bit of salt and take our fork to the mess. When it begins to stick, we add enough milk to make a ball of dough.

Now, it's time to get our hands dirty and begin kneading. It may take a little umph, but in a minute or so you will be ready to roll. The kids pour a cup of flour onto the table and help spread it out. I thump the dough down and press it a little with my hands. Then we dust the rolling pin and set it to work. Rhythmic rolling and squeaking keep the kids glued to the table. Soon, we have a large round circle about 1/4 inch thick. 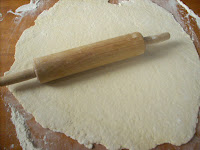 I cheat and use a pizza cutter to slice the rows of noodle into the dough. This even fascinates the kids. I get a lot of questions concerning pizza and noodles, but it keeps them engaged. They know the funnest part is yet to come. I scoop up all the noodles and place them in a pile to dry for later when the broth is boiling. 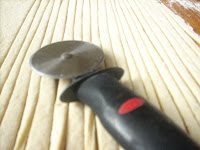 The kids seize the chance to play in the flour left behind on the table. They write their names, numbers, draw pictures, and play with the white stuff. I let them. Technically I am allowing them to play with their food, but It's a wonderful way for them to practice writing and developing their fine motor skills.

In about an hour they will tire of the mess and return to their crazy cooped up selves. It was a sweet reprieve while it lasted and soon we will feast on our labors. Nothing beats hot chicken noodle soup on a cold February day! Happy Rolling. 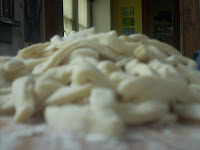 Mix flour with salt and eggs. Add milk, mix, and kneed. Turnout on a floored board and roll until 1/4 inch thick. Slice into narrow or thick noodles and let dry for about an hour before adding to a rolling boiling broth or water. Let them cook for about 30 minutes.
Posted by Plain Graces at 6:34 PM